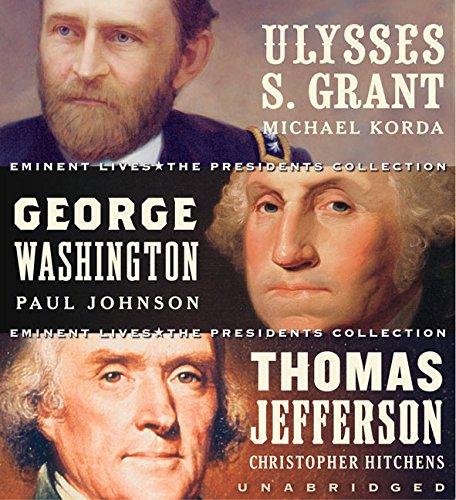 Tsoutsouvas offers a fitting voice for this collection of minibiographies of American presidents George Washington, Thomas Jefferson and Ulysses S. Grant. His narration is professorial without feeling remote, and his precise inflections and seasoned cadences work well to enliven the drier historical information. In , Tsoutsouvas delivers a straightforward rendition of Johnson's historical portrait. Tsoutsouvas's clear-voiced narration of Washington's career as land surveyor, morally heroic commander, Constitution maker reminds listeners why Washington still matters, not only for shaping the executive office but the republic as a whole. Hitchens's treatment of the nation's third president in , paints a vivid picture of early American life and the influence of Jefferson's humanistic and human rights–driven vision. He also plumbs Jefferson's contradictions including his relationship with slave Sally Hemmings. The outspoken author pulls no punches, taking various biographers to task. Tsoutsouvas's take on the material's attitude comes off awkwardly at times, especially after his more evenhanded delivery for Washington. The box set concludes with Korda's which illuminates the Civil War general-turned-president by placing Grant's legacy in contemporary context. The piece opens with pop star Beyoncé Knowles performing with a scantily clad posse at Grant's Tomb on the Upper West Side. Tsoutsouvas must time-shuttle his narration between modern-day and yester-century, and to hear the dignified narrator describe lascivious hip-hop gyrations may cause some listeners to wince. But ultimately he handles such challenges with aplomb and renders the piece with ease. By the end of these rather diverse and compelling history lessons, it's obvious why the competent and engaging Tsoutsouvas was chosen to hold all three sets of reins.