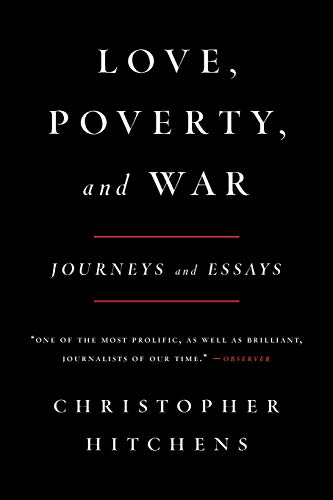 Branded an apostate by the left for his post-9/11 embrace of the U.S.'s war on terror, former columnist Hitchens reprints some of the offending pieces, along with lighter fare. The title names the book's three sections. "Love" turns out to be "of literature"; displaying an eclectic range, Hitchens analyzes the new English translations of Marcel Proust as perceptively as he attacks Christopher Ricks's , among other works. When he shifts to "Poverty," Hitchens's caustic intolerance for the hypocrisy he sees in public figures comes to the fore. Some objects of his scorn are familiar—Mother Teresa, Bill Clinton—but he also finds new targets ranging from Martha Stewart to the Dalai Lama and Mel Gibson, with special opprobrium for Michael Moore, whose is dubbed "a sinister exercise in moral frivolity." The "War" material more fully documents Hitchens's break with the left and finds him passionately arguing against citing U.S. foreign policy, past or present, to rationalize terrorism. In other essays throughout the collection, from a nostalgic account of a drive along historic Route 66 to fond memories of the WTC towers, readers may be surprised to see the master of cynicism engaging in open sentimentality. Even when Hitchens isn't quite what one anticipates, however, he's as sharp a writer as one has come to expect.