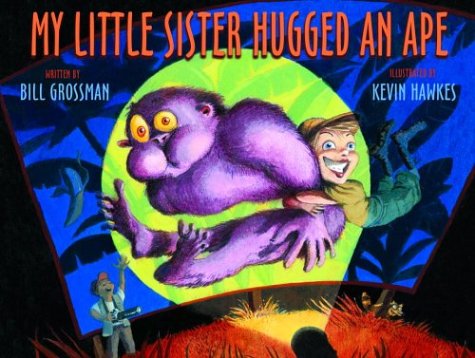 MY LITTLE SISTER HUGGED AN APE

The creators of here turn their attention from counting to the alphabet, echoing the playfully off-color humor of that earlier collaboration. In rollicking rhymed couplets, the camera-toting young narrator chronicles his wide-eyed sister's "hugging spree," describing her affectionate antics with a menagerie of critters from ape to zebra. More often than not, the demonstrative girl's encounters yield comically calamitous consequences, as when "My little sister hugged an ./ She liked its slippery, slimy feel./ It tied itself up in a long, icky knot/ And hung from her nose like a big glob of snot." In other ill-fated embraces, a hog lands on top of her in "soft, gooey mud," she falls out of a kangaroo's pouch into a pricker bush and an umbrella bird lays an egg that "broke into pieces and ran down her leg." Offering some drolly-skewed perspectives, Hawkes's vividly hued, energetic illustrations match the appealing goofiness of the narrative (youngsters can almost smell the skunk's scent from the visual representation of its effects). This fanciful frolic through the alphabet gives youngsters words and images aplenty to chuckle over. Ages 5-8.