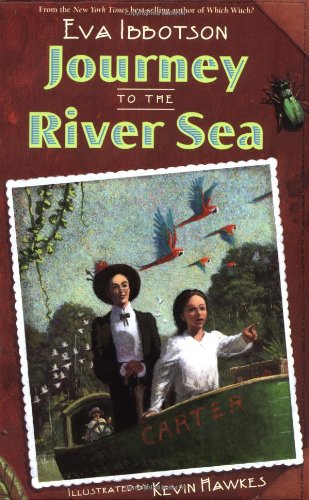 JOURNEY TO THE RIVER SEA

Ibbotson () offers another larger-than-life adventure featuring lovable heroes and heroines, nasty villains, much hilarity and a deliciously gnarled plot. In 1910, Maia, an English orphan, accompanied by her newly appointed governess, Miss Minton, sets off to Brazil to live with distant cousins. She dreams of exploring the banks of the Amazon and viewing exotic wildlife, but her self-serving cousins and their spoiled twin daughters despise the outdoors—almost as much as they despise Maia. The heroine feels like a prisoner, forced to live inside the "dark clinical green" walls of her relatives' bungalow. Her life would be dismal indeed, if she didn't sneak out every once in a while to meet up with two other orphans with whom she has crossed paths: Clovis, a traveling actor, who longs to return to England, and Finn, a rich heir, who would rather live with the "Indians" than be sent to the British estate where his grandfather eagerly awaits his arrival. Suspense steadily rises as all three of the children attempt to escape their undesired fates. Thanks to a series of surprising coincidences and strokes of good luck, the orphans manage to change their destinies. Although the book's dénouement drags on a bit long, readers will come away with the satisfaction of knowing that the good guys are amply rewarded with bright futures and the bad guys get their just deserts. Ages 10-up.