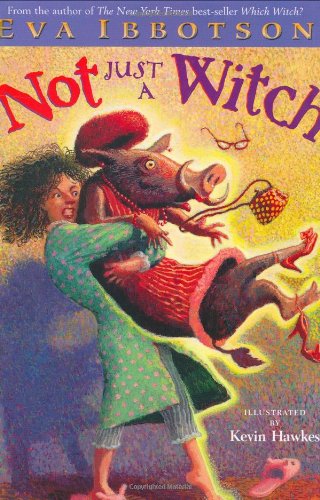 NOT JUST A WITCH

The author of and conjures more rib-tickling entertainment in this fantasy featuring a witch bent on saving the world from wickedness. After graduating from witch school and settling in the small town of Wellbridge as a pet shop owner, Heckie, an animal witch, begins her campaign to flush out evildoers and transform them into exotic beasts. With the help of a motley crew of other witches and wizards, three young human beings and her "dragworm" (her half-dragon-half-worm "familiar"), she successfully manages to change a cruel nursing home director into a "warthog with a greedy snout." She then goes on to turn an abusive chicken farmer into a rare fish. Trouble brews when one of the most ghastly men in town, Lionel Knacksap, a furrier, witnesses Heckie's power and hatches a plot to sweep Heckie off her feet with his charms and make a tidy profit along the way. Blinded by love and seduced by soft-center chocolates, Heckie nearly creates disaster when she agrees to supply her new beau with 300 snow leopards. Ibbotson again blends hilarious social commentary and classic themes of good overcoming evil into a potent recipe for fun. Hawkes's whimsical portrayals of offbeat heroes and deliciously despicable villains add to the merriment. Ages 8-12.