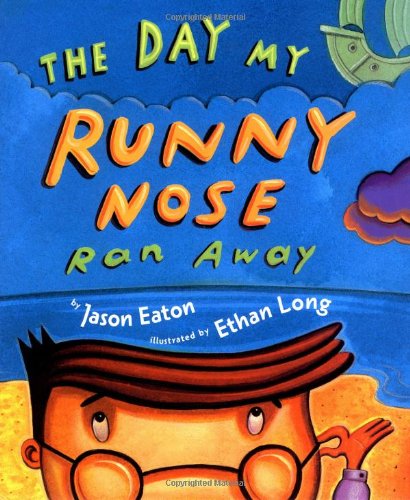 THE DAY MY RUNNY NOSE RAN AWAY

Eaton's first outing is a nervy, wordy parody of swashbuckling rescue tales. Grade-schooler Jason wakes up without a nose one morning and a note from the nose, which is fed up with being wiped on Jason's sleeve: "You're a good kid, but I'd prefer we just be friends." Jason's face is round and doughy, and his hair looks like chocolate icing; the nose (which looks too mature for his face anyway) is not an alarming loss. The boy's grandfather (who was "always sticking [his] nose into someone else's business") suggests he head to Nose Island and packs him onto a floating schooner with a sea chantey– singing captain. On the island, Jason discovers his nose, Montague, crowned king of the noses. Though the boy begs him to come home, Montague refuses ("Silence, Former Face!... Now we shall begin the War of the Noses with its first prisoner—you!"). The final confrontation parodies Hollywood with a tearful reconciliation, but Jason must still return to school noseless. He worries about taunts, but it turns out his classmates are all noseless, too; Montague has recruited the lot of them. Debut picture book artist Long turns in zany portraits in television animation style; palm trees look like folded paper fans, and the humans—and the noses—appear made out of plasticine. The sharp-edged humor might puzzle smaller children, but older kids already accustomed to dark cartoons (and not intimidated by the amount of text) may enjoy the ride. Ages 5-9.