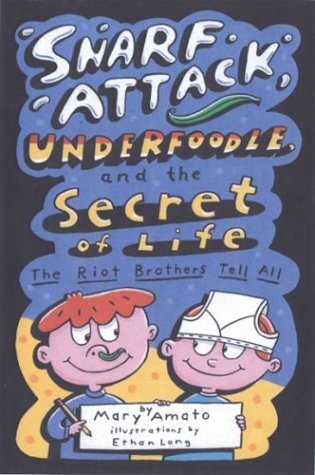 SNARF ATTACK, UNDERFOODLE, AND THE SECRET OF LIFE: The Riot Brothers Tell All

Long's cartoon jacket art—revealing one boy with a green bean hanging out of his nostril and another boy wearing a pair of underpants on his head—offers a cautionary clue as to the level of humor that awaits readers of Amato's ( ) flimsy and derivative tale about siblings Wilbur and Orville Riot. Alas, this fragmented narrative never takes flight. Older brother Wilbur recounts three missions that he and Orville tackle: to capture a bank robber, discover hidden treasure in their house and "overthrow a king." Though ambitious-sounding, each undertaking produces a less than satisfying and not altogether comical result. The title refers to two of the games the brothers delight in playing: in a Snarf Attack, one tries to make the other laugh hard enough at the dinner table so that he snorts milk from his nose; in Underfoodle, the two compete to determine who can pull more pairs of underpants onto his head. Also sprinkled throughout are "Riot Brother Rules" ("Run, do not walk, whenever possible") and "Riot Brother Sayings" ("If you say something and nobody gets it, say something else"). Only kids amused by references to snot, burping and the effects of flaring one's nostrils will find occasional chuckles in these pages. Ages 6-10.