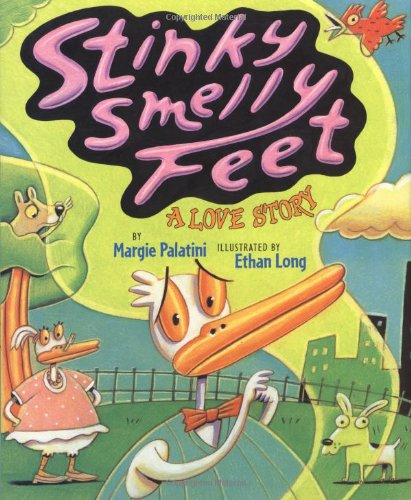 Despite a pair of persistently malodorous webbed feet, true love predictably prevails in Palatini's ( ) snippet of a tale featuring duck sweethearts Dolores and Douglas. Whenever the latter takes off his shoes, the smell overpowers Dolores—and anyone else in the vicinity. As Long ( ) shows it in his hyperbolic art, Dolores and equally traumatized bystanders collapse on the grass in the park while a bird dons a gas mask. In a theater, the ducks' fellow moviegoers scramble for the exits. At the seaside, a lifeguard orders swimmers, "Abandon the beach!" Alas, neither bubble bath nor shower nor powder nor perfume obliterates the olfactory offense for long. Finally, sitting next to her freshly bathed beau, Dolores guesses that the stench is emanating not from his feet but from the pile of shoes in his closet, and the two throw out "every last stinky pair"—only to realize that Douglas "still had stinky, smelly feet. But it did not matter. For what Douglas and Dolores had was really true love." Despite the humor in the intentional repetition, this is still a one-note joke—and one without legs. Long's broad comedy earns the bulk of the laughs. Ages 4-up. ( )