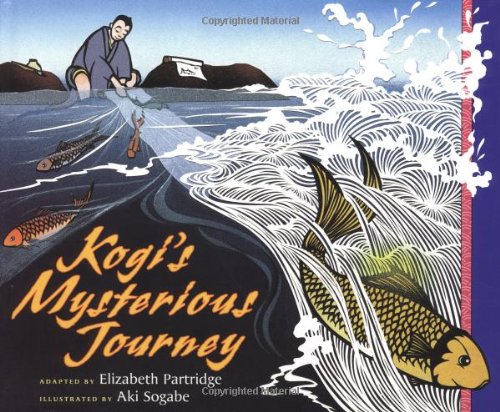 In this team's ( ) second outing, paper cutouts with bold outlines accompany an eerie Japanese folktale. Partridge tells the story of how, at each full moon, the people who live near Japan's Lake Biwa gather to hear the story of Kogi the artist, who tries again and again to paint fish: "But no matter how hard he tried, something was always missing." One night, by the shores of Lake Biwa, he releases a fish he has spent all day drawing into the water, then slips into the water himself; he becomes a fish. "In the vast silence, peacefulness filled Kogi. His spirit reached out to touch the stars." But then he's lured and hooked by his friend the fisherman, and comes within a carp's whisker of being cooked. He wakes in a cold sweat; it was all a dream. The precision of Sogabe's traditional cut-paper Japanese motifs—a kimono-clad artist under the cherry blossoms, a snow-covered mountain—will certainly impress readers, but the fish scenes reveal her greatest gifts. When the fisherman hooks Kogi, the lake churns with fan-sprays of angry waves, and the carp looks set to leap off the page. After waking, Kogi discovers new and magnificent artistic talent, but he isn't interested anymore: the freedom he has tasted in the lake is sweeter, and he enters the water one last time. Kogi may be an unfamiliar figure, but readers will not fail to feel the power of that final decision. Ages 5-8.