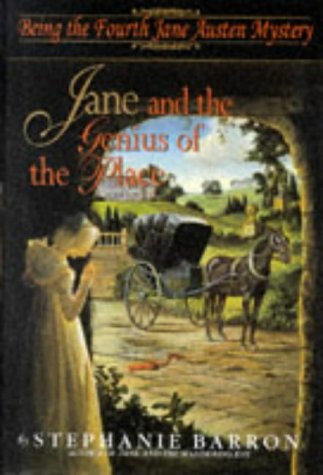 Jane and the Genius of the Place: Being the Fourth Jane Austen Mystery

In this diverting but rather labored installment in Barron's popular Jane Austen mystery series (Jane and the Wandering Eye, 1997, etc.), Barron opens the drawing rooms to political winds, as Jane tackles a murder with possible links to Napoleon's threatened invasion of the English coastline. Sojourning in Kent at the lavish estate of her brother Neddie and his wife, Lizzy, Jane attends the Canterbury Races, where she witnesses a bizarre series of events. A French-born seductress named Fran oise Grey strikes an unknown gentleman with her whip; after the race, Mrs. Grey dramatically drives off and, later, her corpse, ""quite devoid of her scarlet [riding] habit,"" is found back on the racegrounds in the chaise of scoundrel Denys Collingforth. All of Kent clamors for Neddie, a Justice of the Peace, to arrest Collingforth, but Jane persuades him to investigate further. As the town prepares for evacuation, Jane and Neddie interrogate sundry suspicious characters, including the widowed Valentine Grey, a shadowy banker whose professed ignorance of his late wife's adultery rings false; the unctuous Comte de Penfleur, Mrs. Grey's relative and possible lover; and Anne Sharpe, the Austen family's governess, whose distress at the death is unaccountably extreme. Once again, Barron artfully replicates Austen's voice, sketches several delightful portraits (especially of the elegant and playful Lizzy) and dazzles her audience with period details. But the plot is both static and convoluted, and the revelation of the murderer is overburdened with historical significance, a far cry from the real Jane Austen's light style. Author tour. (Feb.)
close
Details