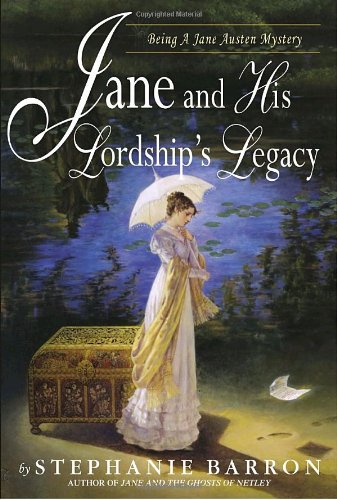 JANE AND HIS LORDSHIP'S LEGACY: Being a Jane Austen Mystery

Readers who hope to recapture, if only briefly, the pleasure of reading Jane Austen for the first time will welcome Barron's eighth Jane Austen mystery, set in the summer of 1809. Jane and her mother have just settled at Chawton Cottage, the country house that will be Jane's last home, when she's surprised by the delivery of a bequest from the late Lord Harold Trowbridge, who was murdered at the end of (2003). No sooner has Jane established that the Bengal chest is filled with his lordship's personal papers than she discovers the mutilated body of a laborer in the cottage's cellar. Jane once again turns sleuth, investigating not only the murder but also rival claims to two different estates in the neighborhood, a bank robbery and a local man's disappearance. The author expertly weaves the tale's disparate elements, sympathetically sketching in such secondary characters as Jane's mother and brother Henry, on both of whom she casts an ironic eye. As usual, Barron has masterfully imitated Austen's voice.