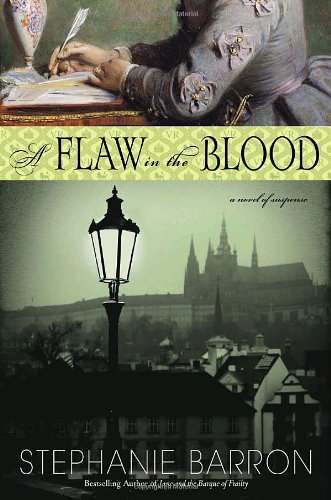 A Flaw in the Blood

After a slow start, all the narrative strands, among them the voice of Queen Victoria, begin to work together in this engaging historical from Barron ( and eight other Jane Austen mysteries). Against a backdrop of national mourning for Prince Albert in 1861, an evil (complete with eye patch) German count, Wolfgang von Stühlen, tracks Irish barrister Patrick Fitzgerald, who 20 years earlier defended a would-be assassin of the queen, and Fitzgerald’s beautiful ward, Georgiana “Georgie” Armistead, who, unusually for a woman of the period, is trained as a doctor. Georgie’s specialized medical knowledge comes into play as the late prince consort’s concerns and his widow’s fears drive the fleeing pair to France, to visit Victoria’s youngest son, the sickly Prince Leopold, and on to Bavaria, the original home of the interrelated family of Victoria and Albert. (An opening genealogical chart shows that the queen and her consort were cousins.) The history of the royal line is diverting, and the royal gossip is even more so.