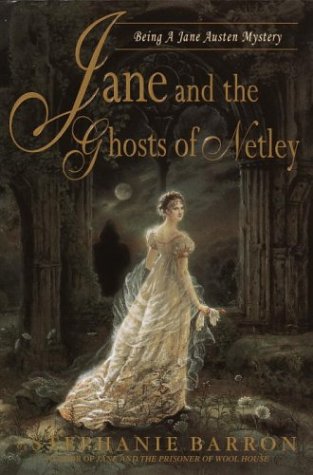 JANE AND THE GHOSTS OF NETLEY: Being the Seventh Jane Austen Mystery

Set in the autumn of 1808, Barron's seventh Jane Austen mystery (after 2002's ) offers a wonderfully intricate plot full of espionage and intrigue. While admiring the romantic ruins of Netley Abbey on the Southampton coast, the author and sleuth receives a summons from Lord Harold Trowbridge, who asks her to gain the confidence of a suspected French agent, Sophia Challoner, who's taken up residence at Netley Lodge near the ruins. On meeting Sophia, Jane is skeptical that the attractive widow is "the Peninsula's most potent weapon" against the British forces there. When an enemy of England sets fire to a frigate moored at Southampton Water, home of the Royal Navy, and cuts the throat of its shipwright, Jane begins to have doubts that could put herself—or someone close to her—in deadly peril. Barron effortlessly works in such actual history as the machinations surrounding Mrs. Fitzherbert, the Prince Regent's morganatic wife, and the issue of Catholic Emancipation, along with the domestic arrangements of the Austen household at a time of great family sadness and upheaval. Brief editor's notes unobtrusively elucidate such matters as mourning practices of the day. The Austen voice, both humorous and fanciful, with shades of , rings true as always. Once again Barron shows why she leads the pack of neo-Jane Austens, which includes Emma Tennant, Julia Barrett and Elizabeth Aston.