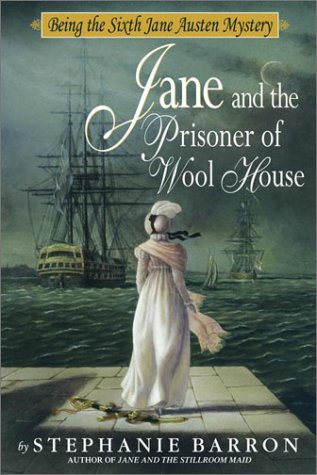 JANE AND THE PRISONER OF WOOL HOUSE: Being the Sixth Jane Austen Mystery

Jane Austen aficionados once again have cause to rejoice, as Barron , etc.) maintains her usual high standards in this latest literary historical, set in the environs of Southampton and Portsmouth, home of the Royal Navy. In the winter of 1807, Jane is one of the Austen household living in lodgings, when her brother Frank enlists her aid in clearing the name of his friend, Captain Tom Seagrave. Seagrave's lieutenant has accused him of killing an enemy officer after the Frenchman surrendered his ship in a naval action off the Portuguese coast. Such a charge under the Articles of War could result in the hanging of "Lucky" Tom. Frank cannot believe that his friend is guilty, and Jane resolves to find a witness, perhaps among the French prisoners of war incarcerated at the Wool House. Soon, Captain Seagrave's is not the only life in jeopardy. Barron has on the whole again caught Austen's tone accurately. Details about life in the British navy serve to illuminate, rather than distract from, the narrative. The novel's real achievement, though, is the portrayal of the minor characters—the retired seaman known as the Bosun's Mate, Seagrave's suspicious and vulnerable wife and Jane's brother Frank, who's anxious for command but uncertain of the price that may be exacted. A somewhat convoluted plot, thanks to Jane's puzzle-solving abilities, comes to a neat resolution.