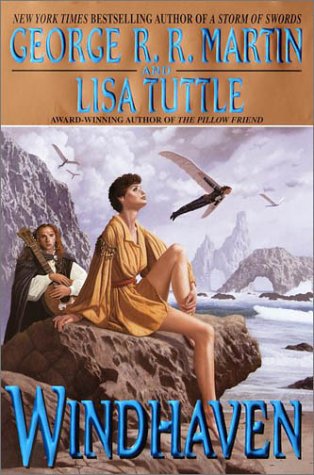 Rereleased 20 years after its initial publication, this gentle tale of a woman's quest to live out her dream to fly by award-winning authors Martin (, and Tuttle ( concerns the hard choices that come from having a vocation. On stormy Windhaven, the descendants of long-ago stranded star sailors live on widely separated islands. Lacking metals to sustain industrial technology, the inhabitants depend on flyers, humans with wings made from the original star sail, to bring news and carry messages, uniting far-flung communities. Maris, a land-bound female adopted into a flyer family, loves to fly. But when her stepbrother, Coll, turns 13, he stands as first-born to inherit the irreplaceable wings, even as he dreams of being a traveling singer instead. When Maris tries to resolve both quandaries by stealing the wings, she challenges not only flyer law but the basic assumptions of Windhaven society. Establishing competitions to win wings and training academies for students from non-flyer families, and defending a "made" flyer accused of treason for stopping a war, Maris faces the lifelong consequences of talent come into conflict with privilege. Although Martin and Tuttle make the correct choices rather clear, they never ignore the costs. With a well-constructed plot (with only minor slips in logic) presented in prose that reads as fantasy, the book will appeal to a YA audience in addition to Martin and Tuttle fans.