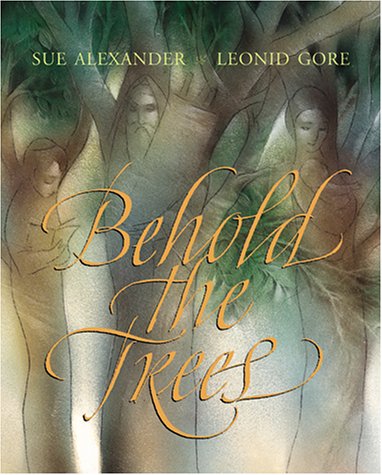 Tracing the horticultural history of the land now known as Israel, Alexander () delicately but powerfully implies a parallel between its trees of and the Jews who settled there. Beginning in 5000 BCE, she fleshes out a timeline that blends history and ecology to chronicle the cycle of bloom, destruction and renewal that has characterized this land over the centuries. She tells of "centuries of wandering—the time of Abraham, Isaac and Jacob," of farming and settlement, of occupations and wars, from the Babylonians and Romans to the Turks and the British. The land stands stripped of its timber until "no owls or doves remained to soar through the air or trill their songs." Rejuvenation begins after WW I, as Jews the world over save to fund the purchase of new trees, trees that have restored present-day Israel to its former beauty. Alexander's poetic imagery ("fires sent twists of smoke into the air") and elegiac refrains ("And no new trees were planted") are heightened by Gore's () resonant, haunting pairing of shepherds and prophets, soldiers and settlers with the graceful flow and sweep of branches and leaves. He plants Corinthian columns of a conquering nation side by side with tree trunks, one of many visual metaphors that hint at the interconnectedness of life. Profoundly satisfying. All ages.