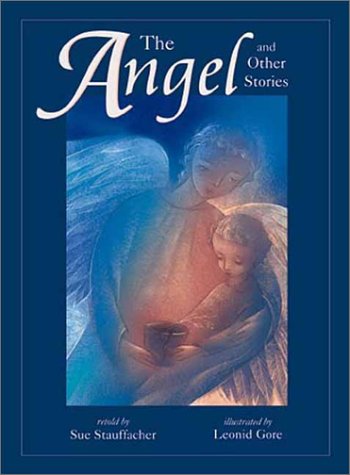 THE ANGEL AND OTHER STORIES

Illustrated with Gore's (; ) distinctive, ethereal mixed-media art and containing 10 stories adapted from Tolstoy, Oscar Wilde and different folktale traditions, this volume puts a sophisticated veneer on its central teachings about faith and grace. Scholars learn that true wisdom can come from the mouths of babes; angels discover the limitations of the human world and the boundlessness of God's. The title entry retells Hans Christian Andersen's famous tale about an angel who, while carrying a dead child to heaven, stops to gather the flower he himself had tended while a crippled boy on earth. The volume is probably best enjoyed in pieces, lest the didactic element overpower the storytelling; Stauffacher's () adaptations do not always improve on existing translations. But Gore's art consistently rewards readers. Using acrylics and pastels, he achieves almost diaphanous effects, diffusing light to evoke the otherworldly realm inhabited by Stauffacher's divine beings. Gore's earthly characters look less heroic here than in previous works; they are humbler and drawn with some comic touches. The particularly graceful cover illustration, of a child tenderly embraced by an angel, should lure readers. Ages 8-up.