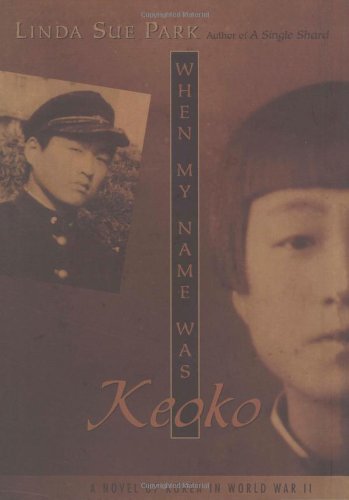 WHEN MY NAME WAS KEOKO

A brother and sister alternate as narrators in Newbery Medalist Park's () well-constructed novel, which takes place from 1940–1945 in Japanese-occupied Korea. The Japanese government forbids the Korean language to be spoken and the country's flag to be flown, and even forces Korean families like Tae-yul and Sun-hee's to change their names (Sun-hee becomes Keoko). Through the use of the shifting narrators, Park subtly points up the differences between male and female roles in Korean society; and the father's process of choosing the family's Japanese name speaks volumes about his strength and intelligence. As the war intensifies, each family member asserts his or her individuality, from Sun-hee, who continues to keep a journal after a soldier calls it "a crime against our Divine Emperor," to her uncle, who prints a revolutionary newspaper in hiding, to Tae-yul, who joins the Japanese army to avoid helping the military police capture his uncle—only to be chosen as a kamikaze pilot. The son comes to an understanding of his father rather abruptly at the novel's close, and some readers may wonder why Tae-yul was not labeled a ("lover of Japan" ). But, in the end, telling details provide a clear picture of Sun-hee and Tae-yul and their world. Readers will come away with an appreciation of this period of history and likely a greater interest in learning more about it. Ages 10-14.