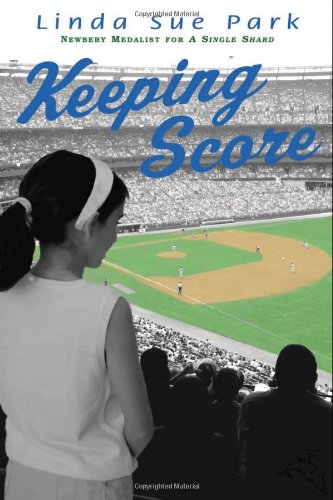 Although the jacket image shows a girl at a baseball stadium, Newbery Medalist Park's ( ) Korean War–era novel is best approached not as a sports story but as a powerful attempt to grapple with loss. Margaret Olivia Fontini, named after Joe DiMaggio (“Maggie-o, get it?”), loves Brooklyn's beloved but doomed Dodgers with a passion. When a new firemen arrives at her father's station wearing his allegiance to the arch-enemy Giants on his sleeve, Maggie keeps her distance until he teaches her how to score the game, a practice Maggie embraces with gusto, believing that recording every pitch and play might actually help Dem Bums finally win. And when Jim is drafted and sent to Korea, he and Maggie write, until Jim's letters abruptly stop. Park evokes the characters and settings with her customary skill and talent for detail; she shows unusual sensitivity in writing about war and the atrocity that, Maggie learns, has traumatized Jim into silence. Readers will be moved by Maggie's hard-earned revelation, that every instance of keeping score “had been a chance to hope for something good to happen,” and that “hope always comes first.” Ages 9-12.