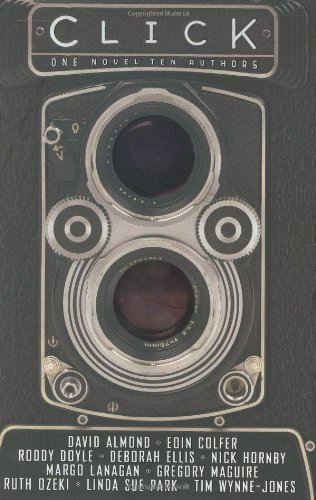 Ten distinguished authors each write a chapter of this intriguing novel of mystery and family, which examines the lives touched by a photojournalist George Keane, aka Gee. The first chapter, by Linda Sue Park, begins with Gee’s death and how it affects his granddaughter Maggie, who ponders the cryptic gift he has left for her: a box of seven seashells and a note reading, “Throw them all back.” Several chapters follow Maggie and her stepbrother Jason; others are flashbacks that return to subjects of Gee’s photographs—a prisoner who created Maggie’s box (Deborah Ellis), a girl with a mysterious illness (David Almond) and a Japanese soldier who lost his legs to a grenade (Ruth Ozeki). Margo Lanagan’s contribution, set in the future, offers a magical, world-altering explanation for how Gee has seemingly led multiple lives, as Nick Hornby hints at earlier. In Gregory Maguire’s conclusion, an elderly Maggie reflects on her grandfather’s influence (“He wanted us to see.... Jason took the camera and took off—his life took off.... I took the shells and I took off too”). The authors’ distinctive styles remain evident; although readers expecting a more straightforward or linear story may find the leaps through time and place challenging, the thematic currents help the chapters gel into a cohesive whole. Royalties benefit Amnesty International. Ages 12-up.