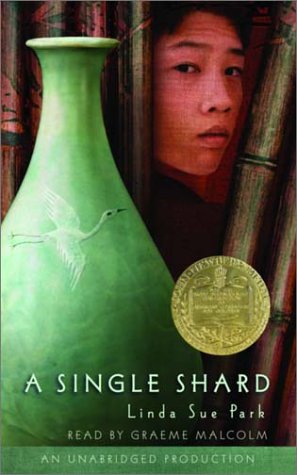 British actor Malcolm initially seems an odd choice of narrator for Park's novel set in 12th-century Korea, but he proves to be a compelling performer on this adaptation of the book that was recently named winner of this year's Newbery Medal. Tree-ear, a 12-year-old orphan, spends most of his time rummaging in trash heaps for food for himself and his friend and protector, the crippled Crane-man. But Tree-ear longs for much more; he wants to become skilled like the potters of his village, Ch'ulp'o, famous for its prized celadon ceramic ware. Tree-ear begins his path by accident, watching master potter Min in secret. Before long, Min grudgingly takes Tree-ear on as an assistant, having the boy fetch wood and do other menial tasks. Eventually Min entrusts Tree-ear with a most important job: delivering two specially crafted vases to the palace in hopes of securing a royal commission for Min's fine pottery work. The vases meet with disaster on Tree-ear's journey, but he persists on his mission, with only a single shard to show the royal emissary. Though Malcolm's performance slows a bit when reading passages describing the routines of the potters and Tree-ear's travels to the palace, listeners will likely be hooked by Tree-ear's perseverance and fascinated by a look into this craftsmen's colony from Korean history. Ages 10-14.