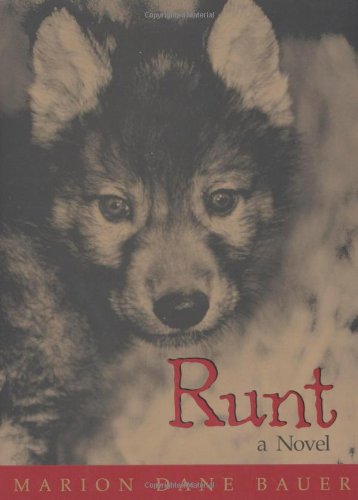 Fans of Jean Craighead George's and its successors will welcome Bauer's () tightly plotted, swiftly paced tale of a wolf pack. Runt, the diminutive last-born of a litter of pups, hopes to prove his worth to his father, King, and acquire a nobler name, like those of his littermates, Leader, Sniffer, Runner and Thinker. But his attempts backfire: he gets lost after following King and the others when they hunt for food, and loses his way again when he decides to brave a fierce storm outdoors rather than take refuge with his siblings in the pack's cave. His efforts to capture a porcupine have especially dire consequences: kind humans remove the painful quills from Runt's muzzle, after which most of the pack avoids him ("You've been with again," an older brother rebukes him). Adding further dimension to the novel are such ancillary characters as a raven who advises Runt, a kind older sibling and the deposed former leader of the pack, Bider, who is also King's nemesis. As Bauer notes in an afterword, her view of wolves is based on scientists' observations (except for their ability to communicate in English). While some may wince at the descriptions of the wolves' hunting expeditions, the author encourages an informed sympathy not only for her underhero but, more generally, for wolves in the wild. Ages 8-up.