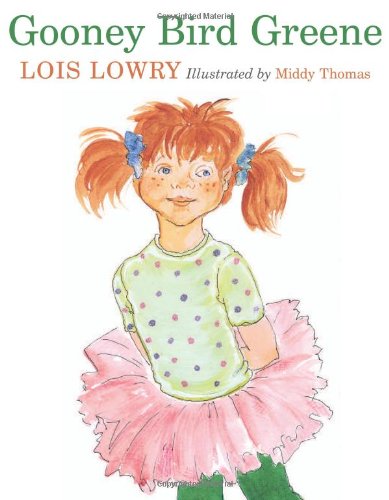 Two-time Newbery Medalist Lowry (; ) introduces a feisty, friendly heroine in this light novel. Readers know immediately that red-haired, freckle-face Gooney Bird Greene is as unorthodox as her name: wearing pajamas and cowboy boots, she arrives at the door of her new second-grade classroom all alone, "without even a mother to introduce her." She announces she has just moved from China (which turns out to be the name of a town, not the country) and demands "a desk right smack in the middle of the room, because I like to be right smack in the middle of everything." Dressed each day in another eccentric outfit, she relays to the class a series of stories that are "absolutely true"—even though they initially seem anything but. Stretching the facts creatively through some wily wordplay, Gooney Bird explains how she spent time in jail (while playing Monopoly), acquired diamond earrings at a palace (they came from a gumball machine in an ice cream shop called The Palace) and directed a symphony orchestra (she directed the lost driver of the bus transporting musicians to the auditorium). Interruptions from curious classmates heighten the fun. Never mind the dubious likelihood that a second-grader would possess such command of language and pithy delivery; youngsters will likely hope that Gooney Bird has enough tales stored in her fertile imagination to fill another volume. Final artwork not seen by . Ages 6-10.