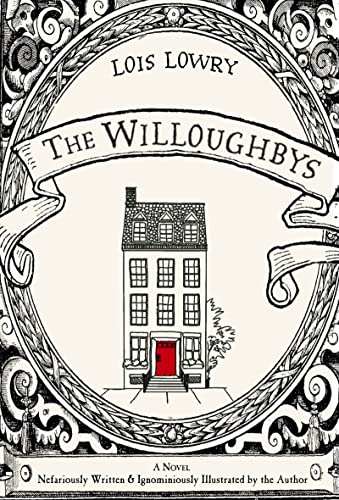 Lois Lowry, who casts her noble and enviable shadow wide across the landscape of children's literature, from fantasy to realism, here turns her quick, sly gaze to parody, a word which in this case means “a short novel mocking the conventions of old-fashioned children's books stuffed with orphans, nannies and long-lost heirs.” These clichés are ripe if familiar targets, but Ms. Lowry knocks off these barrel-dwelling fish with admirable aplomb in , in which two wicked parents cannot wait to rid themselves of their four precocious children, and vice versa, and vice versa versa, and so on. The nanny adds a spoonful of sugar and a neighboring candy magnate a side order of Dahl, if you follow me, as the book's lightning pace traipses through the hallmarks of classic orphan literature helpfully listed in the bibliography, from the baby on the doorstep to the tardy yet timely arrival of a crucial piece of correspondence.

The characters, too, find these tropes familiar—“What would good old-fashioned people do in this situation?” one asks—as does the omniscient, woolgathery narrator, who begins with “Once upon a time” and announces an epilogue with “Oh, what is there to say at the happy conclusion of an old-fashioned story?” This critic even vaguely recognizes the stratagem of a glossary, in which the more toothsome words are defined unreliably and digressively. (He cannot put his finger on it, at least not in public.) Never you mind. The novel does make a few gambits for anachronistic musings (“Oh goodness, do we have to walk them into a dark forest? I don't have the right shoes for that”) and even wry commentary (“That is how we billionaires exist,” says the man who is not Willy Wonka. “We profit on the misfortune of others”) but mostly the book plays us for laughs, closer to the Brothers Zucker than the Brothers Grimm, and by my count the hits (mock German dialogue, e.g., “It makesch me vant to womit”) far outnumber the misses (an infant named Baby Ruth, oy).

There are those who will find that this novel pales in comparison to Ms. Lowry's more straight-faced efforts, such as . Such people are invited to take tea with the Bobbsey Twins. Ms. Lowry and I will be across town downing something stronger mixed by Anastasia Krupnik, whom one suspects of sneaking sips of Ms. Lowry's bewitching brew. Tchin-tchin!