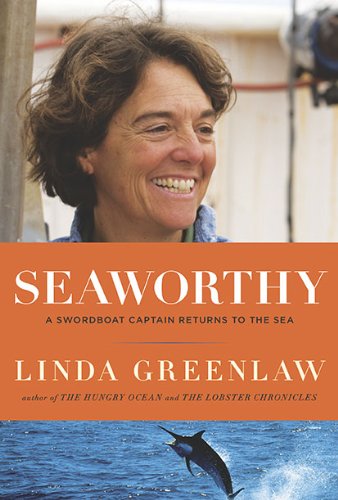 Seaworthy: A Swordfish Captain Returns to the Seas

After a 10-year hiatus from blue-water fishing, Greenlaw ( ) went cautiously to sea, seeking a payday and perspective on her life. Thanks to phenomenon (both book and film), she was celebrated as America’s only female swordfish boat captain. She was now also a mother and an author who relished a new challenge, traveling 1,000 miles from her Maine home with an eager crew of four guys—three of them experienced sailing buddies—looking for swordfish on the 63-foot, six-and-a-half–knot steel boat on the Grand Banks of Newfoundland. It was a 52-day trip—and a sensational misadventure. Nearly everything that could go wrong, did, including her arrest for illegally fishing in Canadian waters. Greenlaw chronicles it all—a busted engine, a malfunctioning ice machine, squirrelly technology—with an absorbing mix of nautical expertise and self-deprecation. After inspecting the , Greenlaw calls it rough, but stable and capable. Then she writes, “Although I was referring to the boat, I couldn’t help thinking the same could be said of her captain.” From mishaps to fish tales, Greenlaw keeps her narrative suspenseful. Between bad luck and self-doubt, she moves from experience to wisdom, guiding both crew and readers on a voyage of self-affirmation.