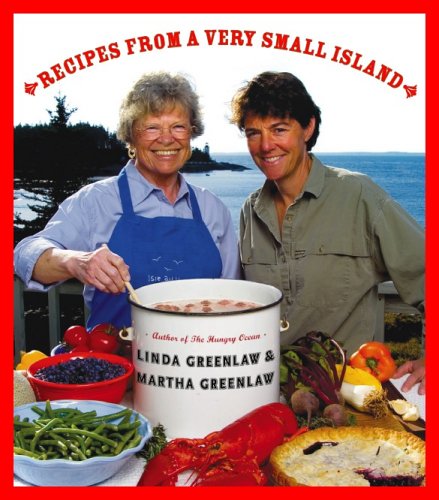 Recipes from a Very Small Island

Linda Greenlaw has proven herself to be a talented fisherwoman and author ( ; ; etc.). And now she shows that she's also a pretty good cook, with this book, co-written with her mother. The two share seafood-heavy recipes tested in the kitchens of their homes on Maine's Isle au Haut, as well as tales—mostly written by Linda—of life on the island (her essay on the improbabilities of pulling off a clambake is a riot). It's a charming collection. As one would expect, there are lots of recipes involving fish, lobster, crabs, blueberries and cranberries. But the Greenlaws present a nice variety of old and new (e.g., classic Island Lobster Rolls appear in the same chapter as unusual Wicked Good Lobster and Black Bean Chili). It's not just summer food, either: there are recipes for hearty dishes meant to help one through a New England winter (Mama's Maple-Flavored Baked Pea Beans; Bibo's Pumpkin Squares) as well as a chapter on meat and poultry. Most recipes are uncomplicated, and all evoke the character of the beautiful, rustic land from which they come.