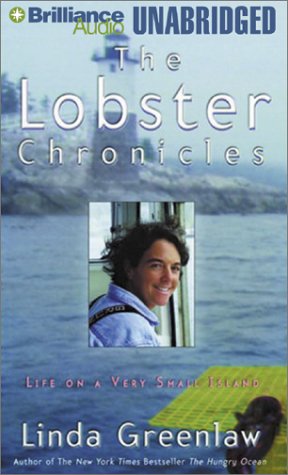 THE LOBSTER CHRONICLES: Life on a Very Small Island

Named by magazine as one of the most intriguing women of 1997, Greenlaw is best known to readers of as the tomboy captain of the sister ship to the ill-fated . Her 1999 bestseller, , chronicled life on a cramped swordfish boat at sea. Now she turns her attention to a similar microcosm, the isolated and colorful community on tiny Isle Au Haut, off the coast of Maine, where her parents live. After 18 years of swordfishing, she has returned home to be a lobster fisherman (she disapproves of the term "fisherwoman") with a small boat and a crew of one: her father. Written with the same humorous roughneck, no-nonsense voice as her first book, this latest work explores an idiosyncratic world. Greenlaw tackles the text as a straight reading. Though the listener has a sense of being read to rather than being told a story, her lack of charm is in effect charming, and consistent to her character; a polished and dramatic reading would seem out of place for someone who's more at home hauling traps than sitting in a sound studio.