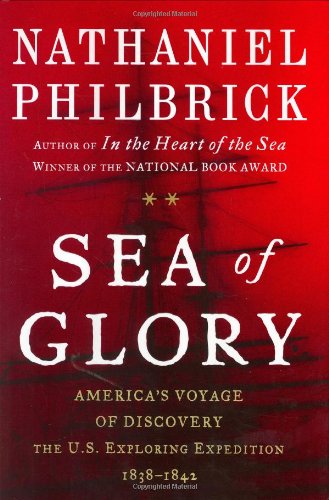 After chronicling the sinking of the whaleship in , Philbrick attempts to rescue from obscurity the U.S. Exploring Expedition's 1838–1842 circumnavigation of the world and its cartographic and scientific accomplishments. With a strong narrative pull but an anticlimactic story arc, he chronicles the six-vessel squadron's Pacific escapades. Instead of a grisly page-turner, however, Philbrick follows his bestselling tragedy with a drawn-out success story. More than a tale of the 's journey, the book also profiles the expedition's egomaniacal commander, Lt. Charles Wilkes; the psychological warfare he waged against his officers; and the near-miraculous survival of the squadron despite Wilkes's perverse leadership and lack of nautical experience. Wilkes was, however, an accomplished surveyor, and the mapped hundreds of Pacific islands, 800 miles of the Oregon coast, 100 miles of the Columbia River and 1,500 miles of Antarctic coast. The expedition's scientists made groundbreaking contributions in ethnography, biology and geology (their collections formed the basis of the Smithsonian Institution). Particularly noteworthy among Philbrick's gripping passages are his descriptions of brash navigation in the Antarctic—but too much of the book bogs down in Wilkes's petty politicking, as he degraded talented men and promoted incompetent ones so as not to be outshone. After four years at sea, he had alienated nearly every officer and returned home to a court-martial. "Instead of a thrilling tale of discovery and incredible achievement, [America] heard more about the flawed personality of the Expedition's commander than anyone wanted to know," Philbrick writes of Wilkes's 1842 trial, in which he was acquitted. Unfortunately, this spoils the retelling, too. Maps not seen by .

Sea of GloryIn the Heart of the Sea