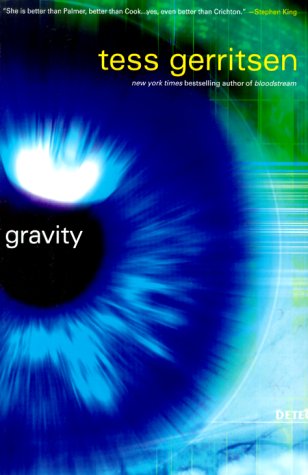 Gerritsen (Bloodstream) meshes medical suspense--her specialty--and the world of space travel in another nail-biting tale of genetic misadventure. Much of this scary thriller is set aboard the International Space Station, where a team of six astronauts suddenly find themselves threatened by a virulent biohazard. Victims first register a headache, followed by stomach pains; then their eyes turn blood red. Finally, they convulse so violently they literally bash themselves apart. Most frightening is what spills out of their bodies: green, egg-filled globules. As astronaut Emma Watson, the station's onboard doctor, struggles to fight the outbreak, her colleagues are dying one by one. A Japanese astronaut, the first to get sick, is sent down to earth via the space shuttle, but he's dead on arrival. Panic spreads when military physicians discover a deadly mutant--a creature that's part human, part frog and part mouse--in the eggs that spill from his body. The military, fearing bioterrorism or even an extraterrestrial invasion, quickly traces the contaminant to an experiment on the space station that was funded by a company researching tiny organisms in the ocean off South America, where an asteroid hit thousands of years ago. Meanwhile, back on the station, Watson is the only one left alive. The military says she's already infected and must be left to die in space, but Watson's husband, fellow astronaut/physician Jack McCallum, won't tolerate that decision, and scrambles to find a way to get her home. It's a tribute to Gerritsen, herself a medical doctor, that such an outlandish tale can be told so compellingly and convincingly. Thanks to her impressive research, the novel's detailed descriptions of life in space consistently ring true, and the progress of the breakout is satisfyingly horrific. Major ad/promo; Literary Guild and Mystery Guild main selections, Doubleday Book Club Super Release; Simon & Schuster audio; author tour. (Aug.)
close
Details