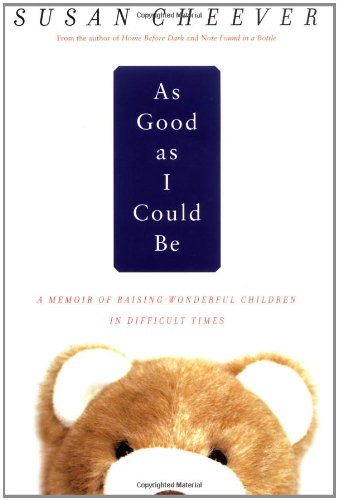 AS GOOD AS I COULD BE: A Memoir About Raising Wonderful Children in Difficult Times

Those who look to Cheever's memoirs (; ) for insights into her father, writer John Cheever, will find this book disappointing. This parenting guide-cum-memoir, based on her weekly New York columns, focuses instead on her life as a single mom bringing up two good kids—her son, James, and daughter, Liley (age 10 and 18, respectively, when she completed the book)—despite divorces from each of their fathers, alcoholism and a host of other problems. Cheever's honest, realistic approach to the difficulties of parenting is refreshing, as is her optimistic belief that people can be good parents despite their own unhappy childhoods. At times the book is repetitive (too many descriptions of how great her kids are). While many of her suggestions are sensible—it's important to listen to our children—others fall short of the mark. She denigrates the value of therapy for children, for instance, despite her own kids' problems (her son is depressed and her daughter has an eating disorder). Working parents who don't have the luxury of flex time may disagree with her blanket rejection of quality time in favor of spending more time with kids. Some essays, like the one on not worrying about what college your child gets into, seem condescending given that Liley is a freshman at Princeton. As a parenting guide, Cheever's is woefully incomplete, but at its best, it is pleasurable, not unlike whiling away a few hours with an encouraging friend, albeit one who brags too much about her kids.