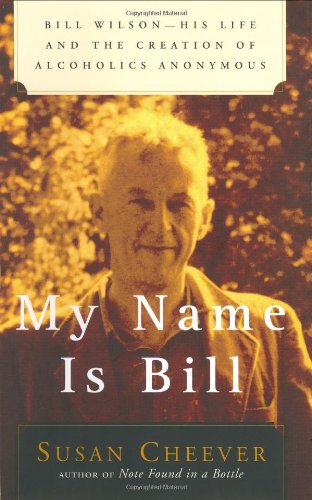 MY NAME IS BILL: Bill Wilson: His Life and the Creation of Alcoholics Anonymous

The first half of Wilson's life was a perpetual battle with alcohol; the second, a continual struggle to secure both his day-to-day sobriety and the organization that became Alcoholics Anonymous. Cheever's portrayal of Wilson's story never resorts to hagiography and doesn't dodge the controversies that other biographers have exploited, such as Wilson's womanizing and LSD use. The author of places greater emphasis on Wilson's rural Vermont childhood; his father's early desertion; his mother's stern, Calvinist nature; and the influence of his few male friends and authority figures. As a boy and adolescent, Wilson bounced among various activities and social groups, seldom sticking with one for long. He tended to seize upon short-term promises of happiness and security, whether a questionable job prospect or, with disastrous consequences, his first alcoholic drink. He grabbed impulsively at the first marriage opportunity, with Lois Burnham, four years his senior, and his drinking severely tested their marriage. In 1935, Wilson's contact with the Oxford Group and its Christian reform philosophy, and with Robert Smith, an Ohio doctor and alcoholic, laid a fragile foundation for the program and fellowship they would build into the worldwide organization for recovering alcoholics. Until his death in 1971, Wilson worked to strengthen the evolution of AA and never entirely abandoned his search for a better cure. Although the compression of so much material disserves Cheever's intentions, the resulting lumpiness is oddly consistent with Wilson's life and character.

The Little Red Book for Women