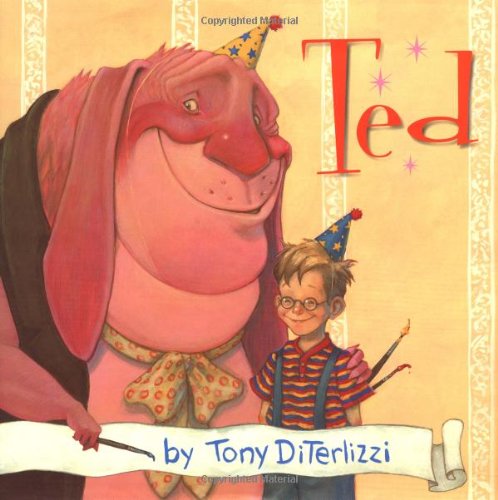 When Ted, an enormous creature with basset-hound ears, twinkly little eyes and a big sewn-in belly-button, shows up at the door of a suburban home and offers to amuse the boy who lives there, the two of them get into all kinds of exuberant trouble. The boy's father, a harried businessman with no time for fun, decides that his son's spluttering attempts to introduce Ted are merely clever alibis and bans imaginary friends from the house. Ted eventually reveals that he knew the boy's father when he was a youngster; once reminded, the father finds his old Atomic Blaster and joins the pair for a rousing game of "space pirates-Monopoly-Twister." DiTerlizzi () conjures up the boy's 1950s-style bungalow faithfully, right down to the cloth-covered TV cabinet speaker and the clunky old plugs in their brown outlets. He has particular fun with a scene in which Ted, armed with a lot of lather and a folding ruler, gives the little boy his first shave ("Ted tied a towel around me and snippy-snap! I looked like a !"). The nostalgia in the book plays to adult readers, but the text has plenty of zip, and there is something gratifying about a story that ends with a parent growing down instead of a child growing up. Ages 5-8.