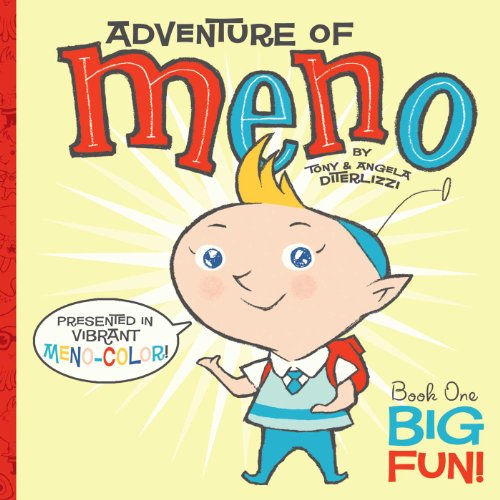 DiTerlizzi, best known for the Spiderwick Chronicles, teams up with his wife to produce a preschool epic so polished that it looks untouched by human hands. Meno, a ready for prime-time elfin creature with a tiny necktie and an unruly cowlick, speaks a wonderful alien dialect that recalls Robin Williams on (“Meno, Meno, elf of space, here to visit human race” runs the Meno theme song, which is included with musical notation in the back of the book). After tracking down his friend—a bespectacled octopuslike creature named Yamagoo—Meno eats breakfast (aka “sunshine snack,” a meal that features “moo juice” and “dough with hole”), and then it's time for a “Big Fun.” “Toot!” says script lettering in the little cloud that emanates from Yamagoo's tentacles. “Poot!” says a similar little cloud coming out of Meno's pants. And that's it for this episode, first in the Adventure of Meno series. Lettering, art and production all mimic 1960s media with uncanny faithfulness (“Presented in vibrant Meno-color!” Meno says on the cover). Children will greet this with giggles. Also available: Ages 1–5.