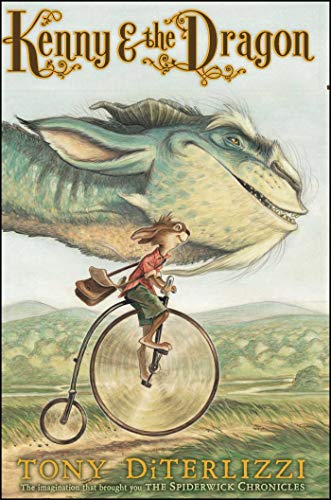 Kenny and the Dragon

Fans hooked on DiTerlizzi's (coauthor of the ) goblins and fairies may be disappointed initially that his newest novel has neither, but chances are they'll warm up to this old-fashioned tale that contains at least one dragon. Kenny, a clever rabbit, befriends a dragon who has settled on his family's property. Overcoming his fears, Kenny soon realizes that Grahame is not the stereotyped fire-breathing creature he reads about in books but a well-read, insightful dragon with a flair for the dramatic arts and poetry. But news of Grahame's presence leaks out to the townsfolk, and before long the king summons a retired knight named (what else?) George—he is also a friend of Kenny's—to battle Grahame to the death. DiTerlizzi's novel is light-hearted and his informal pencil sketches enhance the creative interpretation of what would otherwise be a simple animal story. Some readers might struggle with the mannered vocabulary, which encompasses words like “drake” and varlet,” and Beowulf references will probably be lost on the intended audience. Regardless, readers will understand the author's message: make friends, not unfair judgments. Ages 8–12.