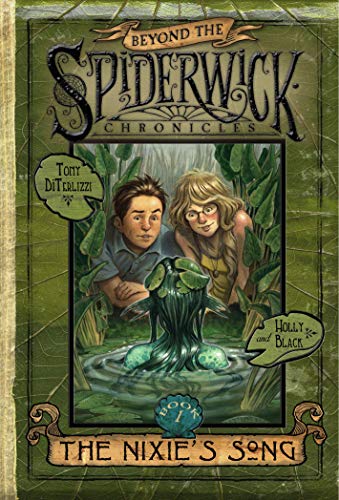 Spiderwick creators Black and DiTerlizzi reopen the book on their popular faerie setting with this slim but entertaining meta-story, kicking off the spin-off series, Beyond the Spiderwick Chronicles. Nick Vargas is in a serious funk after the death of his mother, and it’s only made worse when his father remarries and he ends up with a new sister, Laurie (who “seemed to be proud to be the lamest person alive”). Laurie is obsessed with faeries, thanks to her well-worn copy of Black and DiTerlizzi’s . Nick doesn’t believe they are real, of course, until he picks up a four-leaf clover—and spies a wounded nixie in his yard. The new siblings help the nixie, Taloa, back to the water, and promise to help her find her missing sisters. In their search they find the bodies of three nixies—and a fire-breathing dirt giant that appears to be responsible both for the nixies’ deaths and the destruction of a large section of the woods. Stumped about how to defeat the giant, they head to a book signing where they meet Black and DiTerlizzi (who turn out to be utterly unhelpful). In a fortunate twist, however, they meet Jared and Simon, the original series’ protagonists, who prove more than willing to help. The illustrations are as charming as always, and the text zips along; Black manages to carefully balance the terror of having a dirt giant threaten your house and the equally horrible prospect of having to share a bedroom with a girl. Ages 7-up.