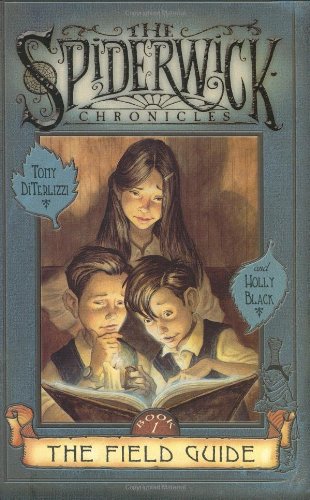 This snappy story, the inaugural title in The Spiderwick Chronicles, sets the scene for the next four books planned. The authors introduce the three Grace siblings—13-year-old Mallory and nine-year-old twins Jared and Simon—and their recently divorced mother, who move into their great-aunt's dilapidated Victorian house. The paper-over-board volume opens to a Victorian-style design; a full-page, framed pen-and-ink scene appears opposite each chapter opening (with clever headings such as "In Which There Are Answers, Though Not Necessarily to the Right Questions"). After Jared hears scuttling inside the walls, Mallory pokes a broom through a kitchen wall and discovers a "nest" filled with unusual trinkets—a doll's head, tiny lead soldiers, bits of tattered fabric—plus one of her own fencing medals. Jared encounters more mystery when a dumbwaiter carries him to a doorless upstairs library. Here he spies a yellowing riddle in rhyme (reproduced on a glossy insert), which leads him to the attic and ultimately to —a handbook to the faerie realm. Often in trouble, Jared gets the blame for some odd occurrences (e.g., Mallory awakens to find her hair tied in knots around her headboard, Simon's tadpoles are frozen into ice cubes, etc.). Appealing characters, well-measured suspense and an inviting package will lure readers on to , due the same month. Youngsters may well find themselves glancing over their shoulders as they eagerly follow the events. Ages 6-10.