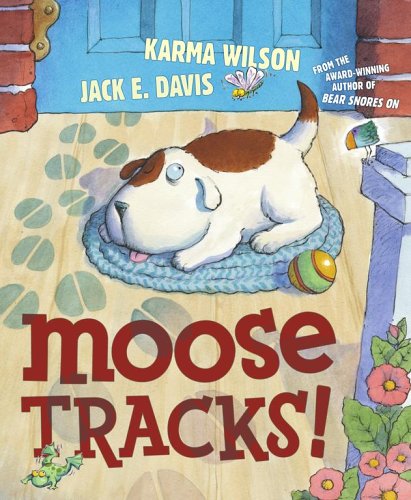 Part game, part mystery, Wilson's ( ) rhyming, jaunty story brims with eccentric characters. The narrator, who goes unseen until the final spread, finds evidence on every page that someone has been in his house because he detects moose tracks everywhere. He remembers the nut shells from the chipmunk who made fudge sundaes for the two of them to share, the feathers from the goose who dropped by to play hokey-pokey and the woodchips from the beaver houseguest who took a bite out of the bedpost. "But left all those moose tracks?" In addition to a surfeit of hoof prints, the messy house brims with dogs, cats, birds, frogs and all kinds of amusing creatures that may well distract youngsters enough to be completely and pleasantly caught off guard by the answer to the narrator's question. Davis's acrylic, watercolor and ink illustrations include plenty of added details and comedy enough to provide interest for more than one reading, even when readers already know the solution to the mystery. Ages 4-7.