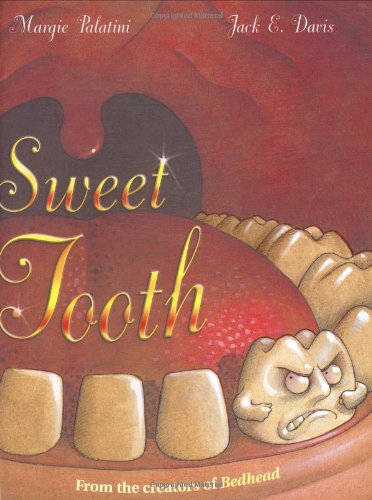 In an interesting twist to the familiar story about how annoying it is to deal with an obstinate, demanding child, Palatini (who teamed up with Davis for ) puts the shoe on the other foot by fashioning a pint-size hero with a nagging sweet tooth. If Disney were to make a film about tooth decay, The Tooth might sound as if he's channeling Danny De Vito playing Snidely Whiplash: " " Young Stewart gets in trouble with his teacher, his family and his friends because of the whining villain. "Those chocolate bunnies never had a chance," the boy explains about his obnoxious behavior. "It was The Tooth." Davis fills his hilarious watercolors with delectable details—bedposts shaped like hot fudge sundaes, dandy candy store wallpaper—and when Stewart decides to take control of his bullying bicuspid by going on a healthy diet, Davis pictures The Tooth waving his porcelain fists as Stewart shovels in peas and broccoli. In desperation, the hero finally aims a carrot that looks suspiciously like a dentist's drill at the wiggly tooth (" and Stewart blissfully turns him over to The Tooth Fairy. Palatini and Davis here cook up a deliciously sly story that will likely satisfy a craving for lively fun. Ages 4-8.