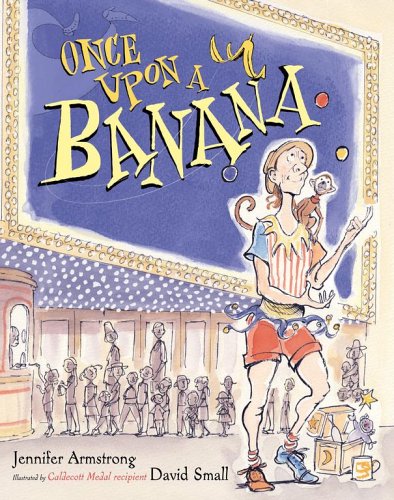 Once Upon a Banana

Armstrong ( ) and Small ( ) join forces for this sublimely silly wordless story, which brings to mind a silent short by Laurel and Hardy (who make a cameo appearance). The action gets underway even before the title page, when a street juggler's pet monkey runs off and steals a deli's outdoor stall. Blithely ignoring the sign reading " ," the monkey tosses the banana peel on the sidewalk, thus triggering a book-long, slapstick-rich chase that covers an entire city center and ensnares a cavalcade of characters, including a passel of dogs, an airborne baby and a banana-packed dump truck. The running joke is that none of the street signs meant to impose order on urban life (" ," " " " ") has any effect on damping the mounting chaos, and in the twist ending, the juggler winds up a hero. Small's loose yet precise ink lines and watercolor wash seem ideal for these crowded streets where anarchy abounds. He clearly relishes choreographing the huge, motley cast and effortlessly connects the geography of one spread to another; the pages overflow with enough pratfalls and comic asides to reward many readings. Even the closing endpapers play a role, tracing the chain of events. Ages 4-8.