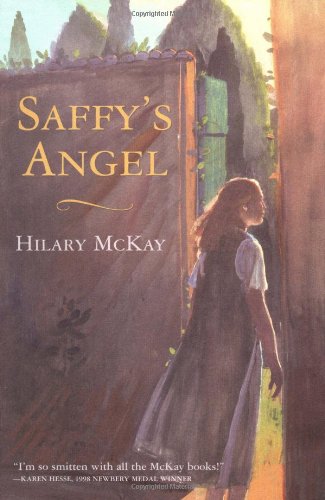 McKay's (; ) sparkling novel once again introduces an eccentric, entirely engaging British family whose members readers will immediately embrace. The Casson parents, both artists—delightfully distracted Eve paints in her backyard shed and comically distant Bill spends weekdays painting in his London studio—named their children from a paint color chart: Caddy (for Cadmium), Indigo and Rose. All but Saffron, "so fierce and alone," who learns at the start of the story that she is actually the Italian-born daughter of Eve's twin sister, who died in a car crash when Saffy was three. Eve explains that Grandfather had been visiting Saffy and Saffy's mother in Siena at the time of the accident, and delivered the girl to the Cassons, who adopted her. Now elderly and catatonic after two heart attacks, beloved Grandfather sits in silence when he visits the family, as the children hover around him, endearingly sharing news of their lives. When Grandfather dies, "They felt as if they had lost a battle they might have won if only they had tried a bit harder."

The man leaves something to each of the children: Caddy receives his crumbling cottage on a cliff in Wales; Indigo his aged Bentley (which Bill dismisses as an "absolute wreck"); Rose his remaining cash (£144). Attached to the will by a rusty pin is a note scrawled in a shaky hand, "For Saffron. Her angel in the garden. The stone angel."

As McKay shapes an intriguing plot around Saffy's angel, the Cassons' capricious capers and understated, droll dialogue will keep readers chuckling. Especially entertaining subplots include: reckless Caddy's driving lessons with her patient instructor (who fabricates a girlfriend to keep his flirtatious student in check), aspiring polar explorer Indigo's sessions sitting on his bedroom windowsill, hoping to cure his vertigo, and Rose's efforts to create works of art using such unlikely materials as "the entire contents of the refrigerator" and the pound coins that constitute her inheritance. An unlikely friendship with Sarah ("the wheelchair girl"), a neighbor, brings out another side of Saffy as the two attempt to find her angel in Siena, and Saffy makes all kinds of discoveries, including her love for the Cassons. The author blends a generous heaping of humor and joy with a dose of pain in a memorable portrait of a vastly human family.

The only disappointment for readers may be that McKay's affecting conclusion arrives too soon. They'll close this book hoping for the Casson clan's swift return. Ages 8-12.