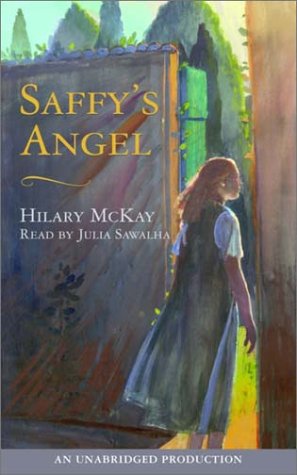 British actress Sawalha (; ) exhibits an impressive range as she portrays various members of the offbeat, artistic Casson family of McKay's bubbly and warm novel. As soon as she can read her mother Eve's paint-color chart, Saffron, whose name is not among the listed colors, realizes that she is different from her siblings, Cadmium (Caddy), Indigo and Rose. The discovery that she was adopted as a toddler, following the death of her mother (Eve's twin sister), has Saffy feeling upset and alone. But several years later, when her grandfather mysteriously leaves Saffy an angel garden statue from her childhood home in his will, she begins to search for it and, finally, finds a sense of belonging. The journey leads Saffron to a new friend, "the wheelchair girl," Sarah, in her neighborhood, and to Italy, where Saffron was born. With a bright, inviting manner, Sawalha doesn't miss a beat shifting among Caddy's daffy flirtatiousness, Indigo's scientific tone and Sarah's relentlessly cheerful tone, among other characterizations. Humor shines throughout; particularly amusing is Sawalha's take on Mr. Werbeck, Sarah's no-nonsense, boorish-but-caring dad. Ages 8-up.