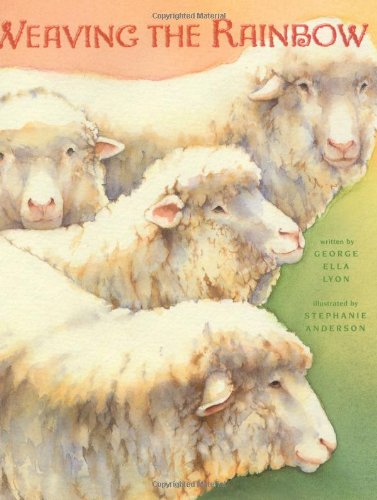 Limpid verse and luminous watercolors form the warp and weft of this beautifully crafted book. Lyon ( ) follows wool from sheep to loom, tracing the birth of a tapestry. In her first picture book, Anderson's ( ) sharp-edged yet airy illustrations show a weaver and her flock of white sheep, whom Lyon calls, mysteriously, "rainbow sheep." For their first year, Lyon concedes in graceful free verse, they were white. "But," she says, against a spread of sheep gazing toward the setting sun, "they were getting closer to the rainbow." This portentous phrase is left to resonate while Lyon describes the shearing, then the fleece itself: "White and springy this fleece,/ but carrying it from the pasture/ the weaver sees rainbows." (Anderson handles the task of rendering shapeless bunches of wool in watercolor with remarkable proficiency.) As the weaver gathers plants and as the artwork depicts her hands preparing to drop the plants into steaming vats, readers realize the rainbow will appear when the wool is dyed; a magnificent spread shows the drying skeins hanging among blossoming apples trees. The weaver warps her loom and begins to weave—and the subject of the tapestry turns out to be ewes and lambs in a colorful pasture. "White sheep in rainbow pastures./ In rainbow pastures she weaves white sheep": the palindrome form of the last two lines mimics the shuttle's back-and-forth motion; so does the poem, as it moves from sheep to yarn, and back to sheep. Ages 3-6.