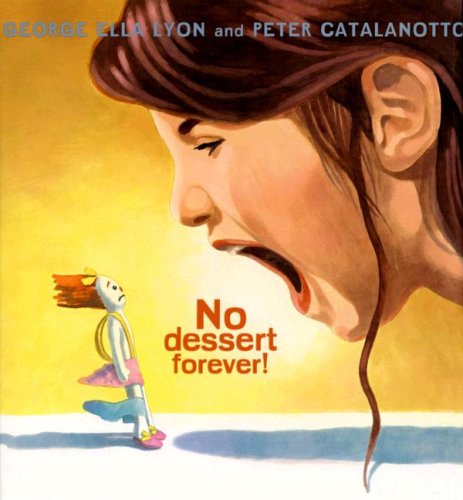 While the middle of this team's ( ) ambitious story contains notable illustrations, which accompany a monologue by an angry girl, the beginning conflict and the resolution unfold through illustrations alone. When the girl nearly breaks a lamp because her brother startles her, her mother unfairly makes her sit on the sofa. Most of the book consists of the girl acting out threats to her ragdoll. "When you get little and I get big, I'll be the Queen of Mealtime and I'll say, 'People who don't finish their spinach-mousse mush don't get any dessert.' " Some of the girl's dialogue seems puzzling ("People who won't wear coats thick as bricks don't get to go outside"), and as she gets carried away, her taunts grow increasingly unreasonable. Catalanotto shows the girl's crescendoing anger as she screams, " " and toys blow off of the spread as if propelled by a gust of wind. The book returns to wordless illustrations of the living room, as the mother catches the brother attempting another scare, and punishes him instead. The vindicated sister says to her doll in a rather abrupt and emotionally unconvincing ending, "When you get little and I get big, I'll never get mad at you!" Because the text focuses exclusively on the girl's feelings and provides no alternative narration, young readers may have difficulty teasing out the theme of the book. Ages 5-9.