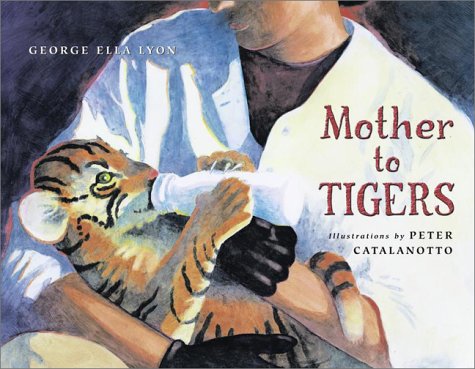 Arresting art illuminates Lyon and Catalanotto's (previously teamed for ) tribute to Helen Martini, founder of the Bronx Zoo's animal nursery. On each spread, mixed-media images on torn-paper panels form jagged, vertical stripes around the white space that encloses the lyrical text, contributing to the drama and sense of urgency. Watercolor paintings are drenched in sunlight while charcoals and chalks on brown paper reinforce the 1940s context. A prefatory poem ("Suppose you were a lion cub—abandoned") will get readers' attention with its tale of a woman rearing a lion cub in a city apartment; the main story then backs up to describe Helen and her husband, who worked at the Bronx Zoo (he had been a jeweler until Helen urged him to "follow [his] heart/ and work at the Zoo"). A triptych of two giraffes, a pair of elephants and a polar bear swimming underwater make clear the irresistible hold the animals have on the couple. Her husband is the one who brings home the abandoned lion cub, which is to be the first of many young animals Helen tends before creating a nursery at the Zoo. "Starting out," says Lyon, Helen "didn't get paid/ but that wasn't what mattered./ She was following her heart." Although the follow-your-dream theme may be trumpeted a bit strongly, the story cannot miss its mark as animal lovers appreciate Helen's love for and commitment to saving nature's newest members. Ages 5-8.