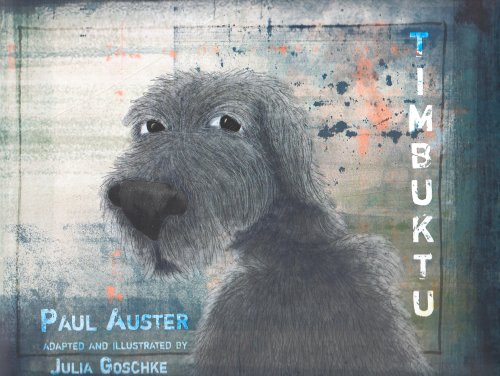 Abridged from Auster's 1999 novel of the same name, this wrenching but misguided production follows an existentialist dog named Mr. Bones who finds meaning through self-annihilation. Adopted by a suburban family after the death of his homeless master, Willy, Mr. Bones realizes that life as a pet in a rule-bound bourgeois world can never replace the “necessary” role he played in Willy's life. He decides to rejoin his old owner in “Timbuktu”—as the afterlife is known to him—by running into traffic. “He ran toward the noise, toward the light, toward the glare and the roar that were rushing in on him from all directions. With any luck, he would be with Willy before the day was out.” Goschke's moving portraits of the bedraggled Mr. Bones, the complexity of her textures, the subtlety of her lighting and her ability to distill a precise moment from Auster's clotted prose make for a visually striking book. Unfortunately, the picture-book format and trim size will surely turn off those eager to put their lap-sit years behind them, while the abundance of text (in a hard-to-read, stencil-like font) short-circuits any resemblance to a graphic novel. Ages 12–up.