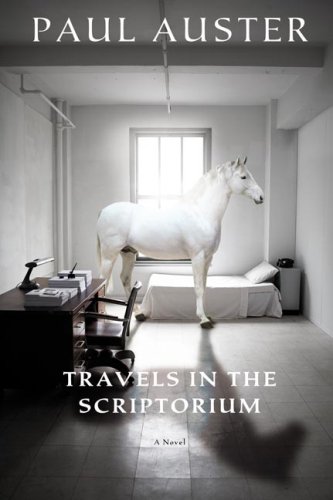 Travels in the Scriptorium

On the centennial year of Samuel Beckett's birth, Auster's new novel nods to the old master. We open with a man sitting in a room. The man doesn't remember his name, and a camera hidden in the ceiling takes a picture of him once a second. The man—whom the third-person narrator calls Mr. Blank—spends the single day spanned by the book being looked after, questioned and reading a fragmentary narrative written by a man named Sigmund Graf from a country called the Confederation who has been given the mission of tracking down a renegade soldier named Ernesto Land. During the course of the day, a former policeman, a doctor, two attendants and Mr. Blank's lawyer visit the room, and Mr. Blank learns he is accused of horrible crimes. (His lawyer claims he is accused of everything "from conspiracy to commit fraud to negligent homicide. From defamation of character to first-degree murder.") But this may or may not be true—the narrative veers toward ambiguity. While Auster's lean, poker-faced prose creates a satisfyingly claustrophobic allegory, the tidy, self-referential ending lends a writing-exercise patina to the work.