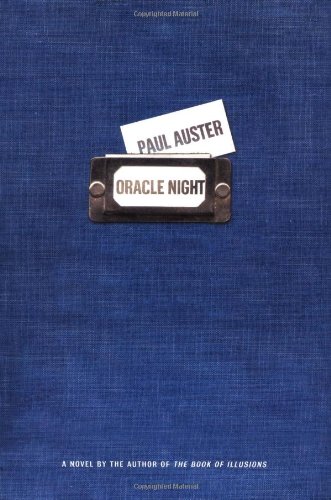 One morning in September 1982, a struggling novelist recovering from a near-fatal illness purchases, on impulse, a blue notebook from a new store in his Brooklyn neighborhood. So begins Auster's artful, ingenious 12th novel, which is both a darkly suspenseful domestic drama and a moving meditation on chance and loss. Reflecting on a past conversation and armed with his new notebook, Sidney Orr is compelled to write about a man who walks away from his comfortable, staid life after a brush with death—a contemporary retelling of the Flitcraft episode in Dashiell Hammett's . Orr's description of his fictional project takes over for a while, but through a framing narrative and a series of long, occasionally digressive footnotes, he teasingly reveals himself, his lovely wife, Grace, and their mutual friend, the famous novelist John Trause. While Orr's hero finds himself locked in a bomb shelter, Grace begins behaving strangely, the stationery shop is shuttered, John's drug-addicted son looms menacingly in the background and the blue notebook exerts a troubling power. The plot of this bizarrely fascinating novel strains credibility, but Auster's unique genius is to make the absurd coherent; his stories have a dreamlike, hallucinatory logic. The title comes from the name of the novel that appears within the story Orr is writing, and hints at the book's theme: that fiction might be at some level prophetic, not merely reflecting reality but shaping it. There is tension, however, between power and impotence: as Orr puts it, "Randomness stalks us every day of our lives, and those lives can be taken from us at any moment—for no reason at all."