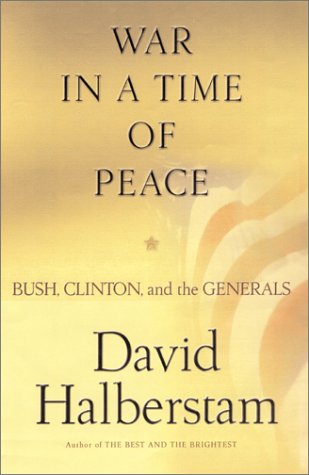 WAR IN A TIME OF PEACE: Bush, Clinton, and the Generals

Events and personalities clash in this extraordinary sequel to Halberstam's classic examination of America's road to Vietnam, (to be reissued in September by Modern Library). Thirty years on, the world is a different place; no longer clearly divided between good guys (us) and bad guys (the Soviets), the danger lies in local wars of ethnic and nationalist hatreds. If America, looking inward and little concerned with the wider world, was too quick to use power in Vietnam, it is now too confused—if not too unwilling—to know how to use it. Bush the elder, despite his triumph in the Gulf War, is replaced by Clinton, a leader more in tune with America's desires. But the world will not go away: disaster strikes in Somalia as a dead American soldier is dragged through the streets for the world to see. The military are confirmed in their distrust of the brash politician Clinton, a "flirt and seducer," and harden their resistance—especially Colin Powell's—to the commitment of U.S. military power without a clear plan and purpose. With all of this in play, Halberstam's central story unfolds: the U.S. reaction to the crimes and aggression of the Serb leader Slobodan Milosevic. Clinton advisors and the military thrust and parry for years as the carnage continues, and while eventually a U.S.-dominated air war does drive Milosevic from power, the broader question of America's role in a new world remains unanswered. This is vintage Halberstam, combining sharp portraits of the political players—Bush, Clinton, Powell, Madeleine Albright, and so many others—with nuanced reportage of the events they shape and are shaped by.