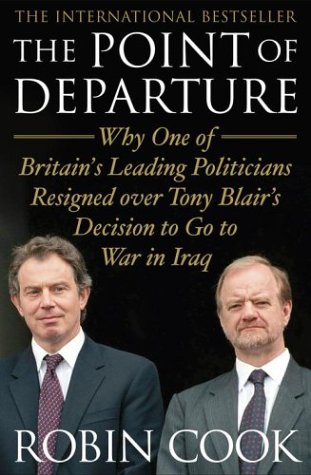 THE POINT OF DEPARTURE

Cook made headlines last spring as one of those who resigned from Tony Blair's cabinet in protest over the coming Iraq war. There's a lot in this diary of the past two years about his growing feelings against the war, his objections largely based on belief that Saddam didn't have any unconventional weapons and that the links between Saddam and Osama bin Laden were tenuous at best. As Cook puts it, the need for war because Saddam had unconventional weapons "might have carried more credibility if both the US and then the British governments had not been together in it up to their armpits in creating that capacity in the first place." Cook also repeats what are now familiar arguments: specifically, that the policy of containment was working, and that nonmilitary intervention would have been more effective. He's generally respectful and polite toward Blair — describing him as the most successful Labor leader in recent years — but he calls supporting the war "the wrong choice for Britain." His are familiar arguments, but Cook expresses them well and offers a dash of much-needed humanism in a polarized world. He also offers a pragmatist's vision for the future intended as a prescription for non-Blair leftists. Unfortunately, he does not follow through enough on the title's promise—the book fails to stick to the point. Cook spends too much time discussing British parliamentary reform, a topic unlikely to find much resonance among American readers. But those interested in what a principled British politician who opposed the war in Iraq has to say about that war will want to take a look.