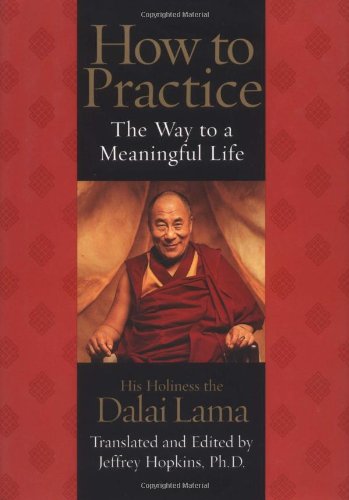 HOW TO PRACTICE: The Way to a Meaningful Life

The Dalai Lama, a formidable teacher, presents a way that is the middle way, but not necessarily the easy way. Because the spiritual leader of Tibetan Buddhism has a natural gift—as well as the translating and publishing resources—that makes his teachings accessible, it is easy to forget the rigor and depth of those teachings. Too, Buddhism so often appears in the West as a system of daily behavior and practice that it is also easy to overlook the compelling intellectual challenge it presents to the Western understanding of reality. His Holiness starts on familiar Buddhist ground (morality of action, suffering, compassion) and chapter by chapter adds doctrine and complexity until teachings from the heights of imaginative Tantra and Tibetan deity yoga are being explicated. For the uninitiated the climb is steep, and those seeking general ethical guidance would do better with an easier text (His Holiness has written those, too). For the serious, however, the Dalai Lama offers elegant clarity about the paradoxes at the heart of Buddhism—including the central Heart Sutra itself, the teaching of form-is-emptiness—and about the intellectual intricacy of Buddhist teachings. Tibetan Buddhism is considered the esoteric wing of Buddhism; this slice shows some layers of its complexity while whetting the spiritual appetite for more understanding, or what Buddhists would call the intention for enlightenment.